Rufus Bullough looks at the standout performers from Week 1 of the PSL.

After week one of games in the PSL, Lahore Qalanders and Islamabad United have seized the early initiative, topping the table after winning both of their pairs of opening games. Both the Multan Sultans and Quetta Gladiators are yet to get off the mark, and will be hoping to rectify this through this weekend’s fixtures.

CricViz are using our innovative impact tool to measure a player’s contribution to the match. By using historical ground and player performance data, ‘Impact’ contextualises a players performance above and beyond their runs and wickets totals. It takes the game situation and quality of opposition into account when generating a players rating, and using this data we can calculate the tournament’s best and most important performances, enabling us to calculate the overall MVP.

This is how the MVP table looks before the start of Friday’s double header:

Mohammad Hafeez is the current overall leader with an impact of +36.3, but the standout single performances of the week go to Mohammad Rizwan, and Shaheen Shah Afridi.

Newly appointed Multan Sultan skipper Mohammad Rizwan set the tone for his tenure, with a starring batting role in his sides opening game against Islamabad United. His well constructed 71(53) was the lynchpin around which Multan built a competitive total of 150/8 from their 20 overs.

In the end, their total was slightly below par, and the currently undefeated Islamabad United went on to chase the Sultan’s total seven down with an over to spare. In spite of this, Rizwan demonstrated excellent touch and composure in constructing his innings, whilst others around him faltered and failed. Rizwan may not have the tournament’s highest score, but his impact rating of +25.8 for this innings is the highest of the 83 knocks played so far in this year’s edition, largely down to his control of the innings and shepherding his side to a competitive total.

After losing partner Chris Lynn in the second over of the match, Rizwan showed great resolve against the moving new ball, providing a stout defence and his usual proactive nature around strike-rotation. He shared a 48-run partnership with James Vince for the second wicket, but after the Englishman was dismissed at 52/2, his batting partners stay at the crease became all together too fleeting.

74% of the balls faced by Rizwan were delivered by pace bowlers, and the diminutive opener was exceptionally ruthless against anything short, scoring 20 runs from the eight deliveries of this length faced through the innings, at a strike rate of 250.00. 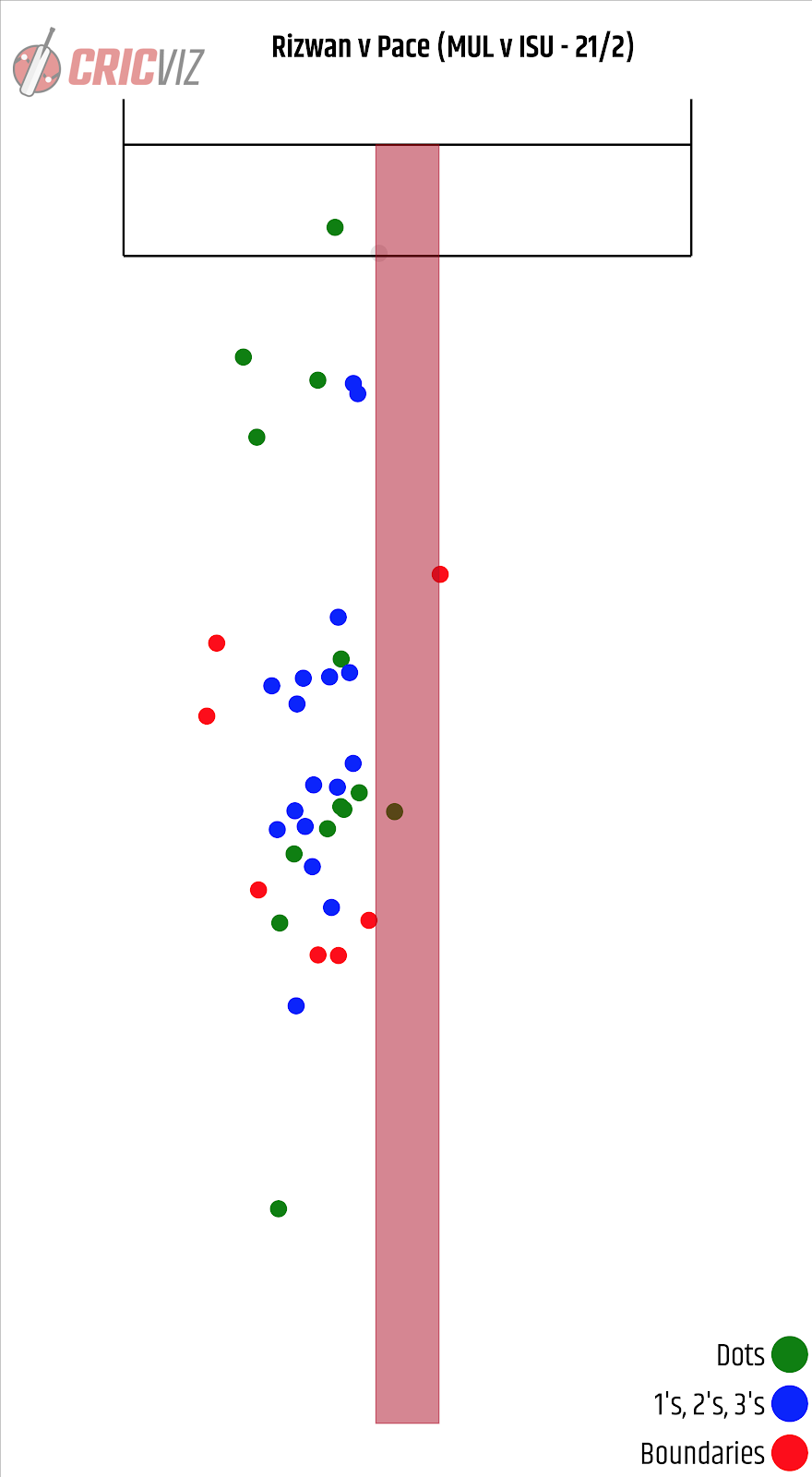 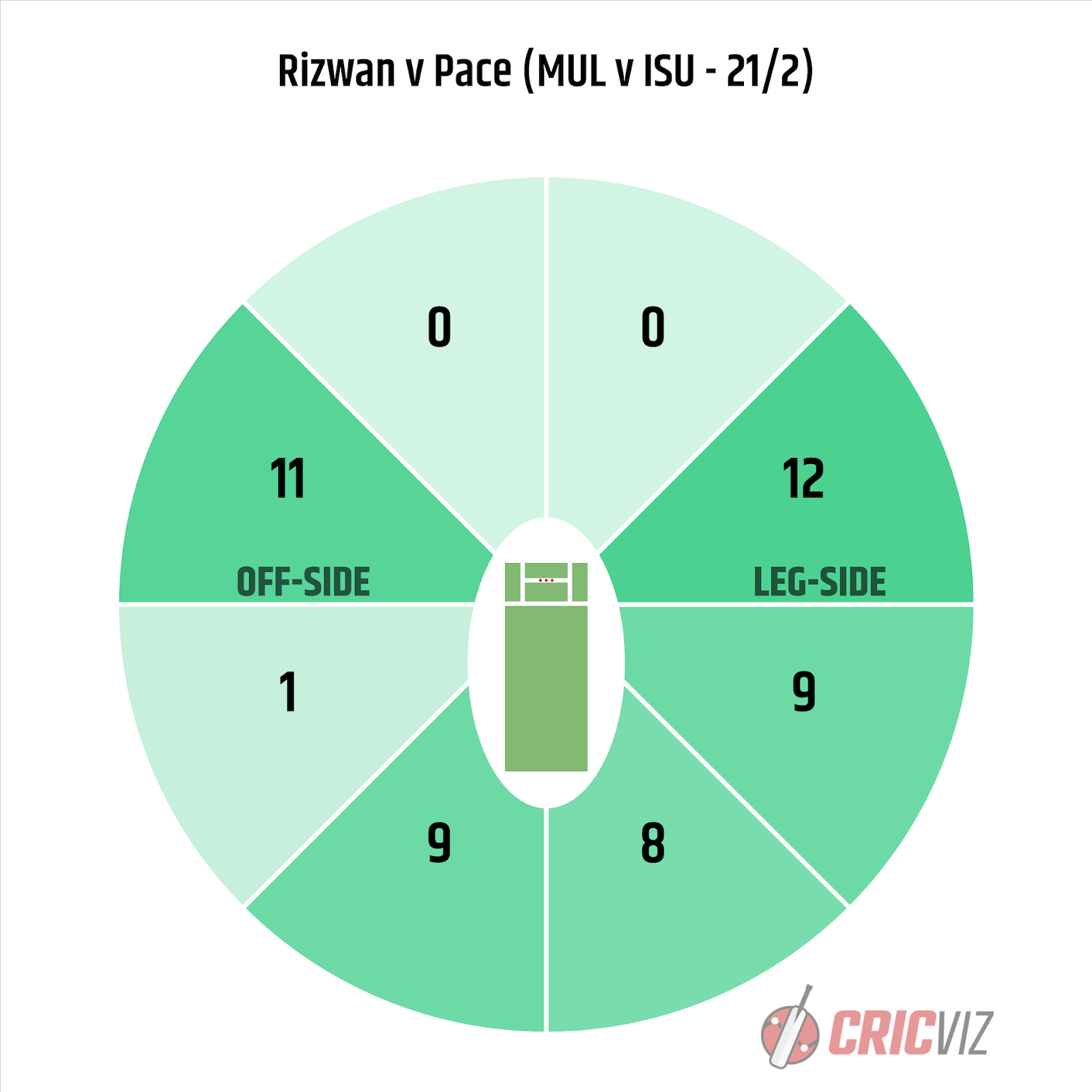 He was at the peak of his powers between the fifth and eight over of the match where he plundered 31 runs from 12 deliveries from Fahim, Gohar and Gregory finding the fence on six occasions and only facing one dot ball. After moving into the second half of the innings, Rizwan’s role changed to more of an anchor as wickets fell around him. He managed to score at a run-a-ball through this second half before eventually being dismissed in the 19th over.

Despite being on the losing side of this encounter, Rizwan’s innings was vital in keeping Multan in the game and eventually making them competitive, hence his impact rating of +25.8.

Shaheen Shah Afridi’s 3-14 against Peshawar Zalmi has been the most impactful bowling performance of the PSL to date, netting him an excellent rating +22.7 for the match. He dismissed Imam-ul-Haq with the very first ball of the game with a gentle outswinging delivery, moving 2.8° through the air and inducing the false stroke, and the faint edge being grasped thankfully by Ben Dunk with the gloves.

After his first two overs, Shaheen had figures of 1-4 and had bowled a total of eight dot balls. He went for his first and only boundary off the bat of Ravi Bopara in the 17th over, a streaky hack that took the edge and flew over short third man. Shaheen drew 38.4% false shots in this innings, his ninth highest percentage out of his 64 bowling performances in T20, and far higher than his career average figure of 26.4%.

He eventually removed Sherfane Rutherford with a well disguised off-cutter on the last ball of the 17th over, which the Guyanese left-hander mistimed and was pouched on the long on boundary. At just 123.98 kph, this was Afridi’s slowest ball of the innings and his eighth slowest wicket taking delivery in his career.

Afridi eventually claimed the wicket of the veteren Englishman Ravi Bopra with his final ball of the 19th over, and the last of his spell. The over up until this point had conceded just three runs and the pressure for quick runs proved too much for Bopara who mis-cued another  slower ball straight up into the air, before being easily taken by the mid-off fielder.

Afridi kept it brilliantly tight with the new ball, stifling the Zalmi innings before it even got started. His control, accuracy and trickery at the death prevented the set Bopara and dangerous Rutherford from pulling away, and kept the Zalmi to a manageable total of 140/6, a total which proved no problem for the Qalanders batsmen. Afridi’s impact of +22.7 was his seventh highest overall impact of his career to date. 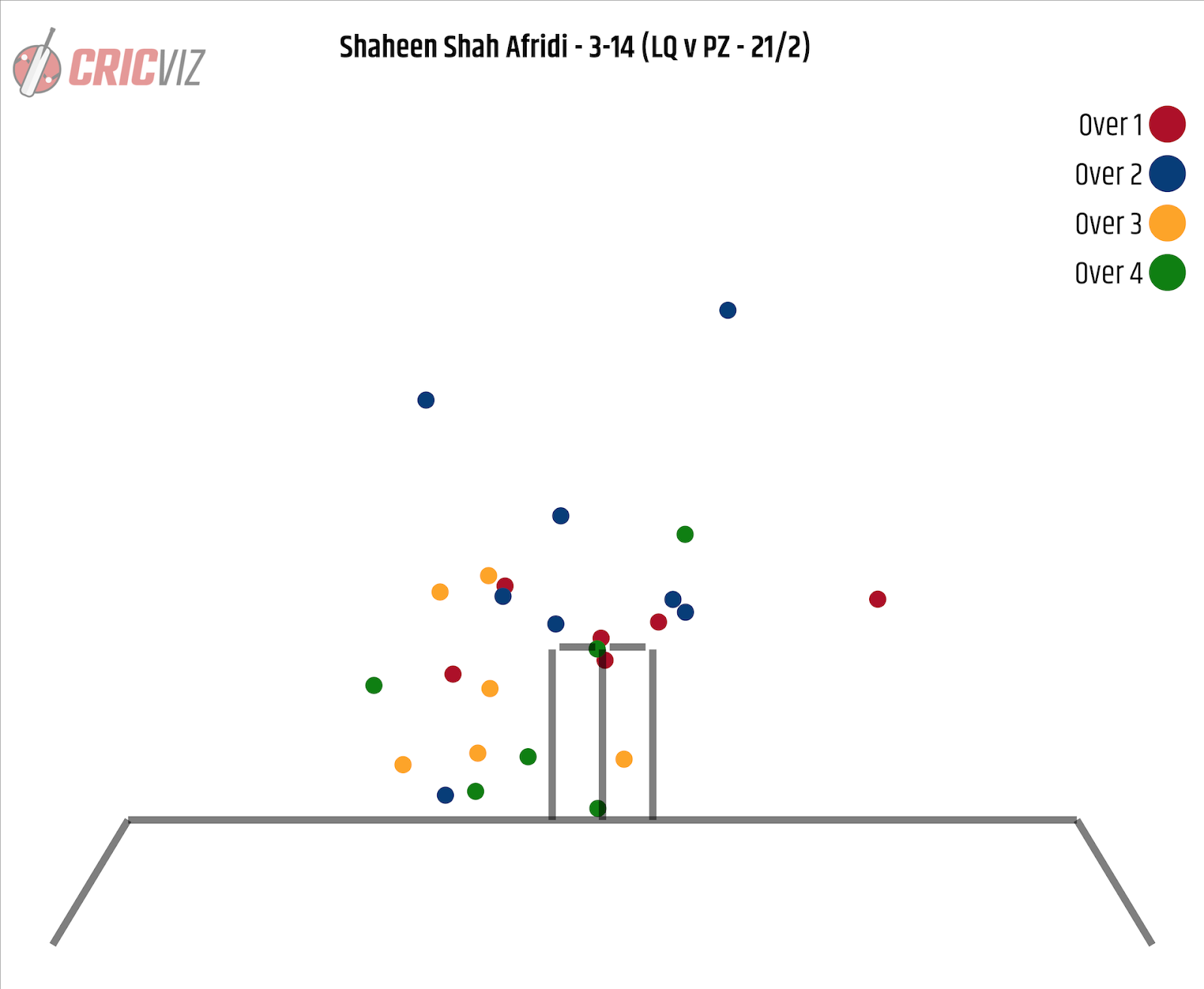 Rufus Bullough is an analyst at CricViz.