CricViz analyst Rufus Bullough looks back at an outstanding innings from the England skipper.

On the one hand, it was an all too familiar batting card for England in red ball cricket this winter with just one player in the top seven scoring above 15. However, fortunately for England, that player was captain Heather Knight, and that score was a magnificent 168 not out, catapulting England to a competitive first innings total of 297 and keeping them in touch in the all important Test match in the Women’s Ashes.

The early part of Knight’s innings was characterised by discipline and watchfulness. After losing Winfield-Hill in the third over, Knight provided an ever present calming influence at the crease as she routinely kept at the good balls and took whatever scoring opportunities she could find. For her first 24 runs scored, Knight’s strike rate was down at just 31.1, whilst she acclimated to the Canberra conditions, attacking just 38% of balls faced and leaving one in every five deliveries. As her mammoth innings progressed, her attacking intent increased dramatically, along with her strike rate as a consequence. By the morning of Day 3 when she was past the 125-run mark, she was attacking 78% of her balls faced, and striking at just below 90. 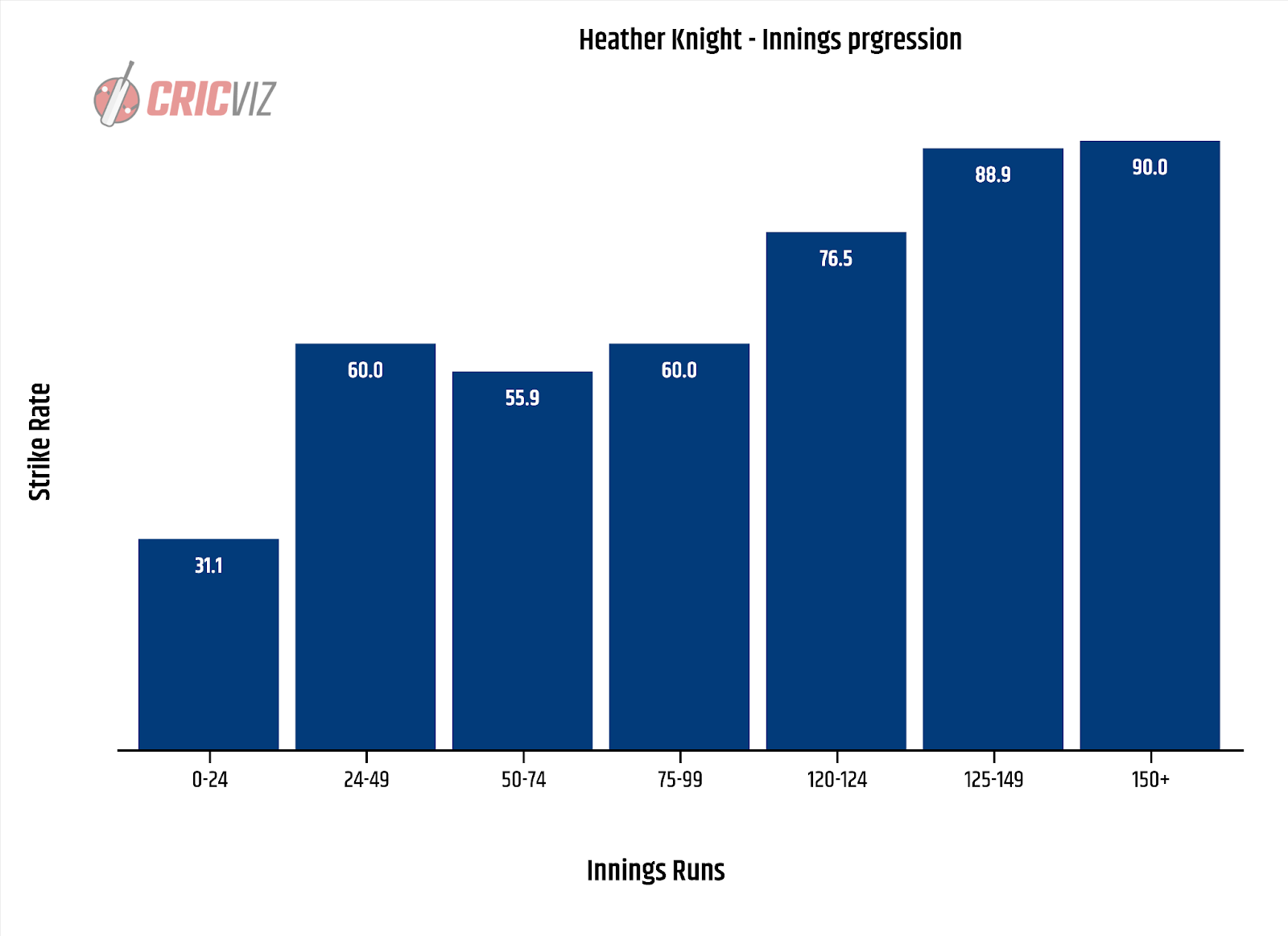 Despite wickets were falling frequently at the other end, Knight remained positive and proactive. Before her record breaking 9th wicket partnership with Sophie Ecclestone, her largest partnership of the innings was just 39, shared with Amy Jones for the fifth wicket. Ecclestone faced 117 deliveries out of the 196 in total, and whilst she only scored a fraction of the runs, her contribution towards the partnership as a whole and the innings itself should not be overlooked, showing real application at the crease, worthy of a batter suited to role higher in the order than number 10.

Knight’s strike rate rate increased as the innings progressed, and her execution of shots did not falter. As her innings reached its climax and when her scoring rate was at its highest, her false shot percentage was among the lowest it had been all innings, particularly when she passed the 150 mark. This was an example of a world class player, performing at the absolute pinnacle of her ability against a frustrated, tiring bowling attack. 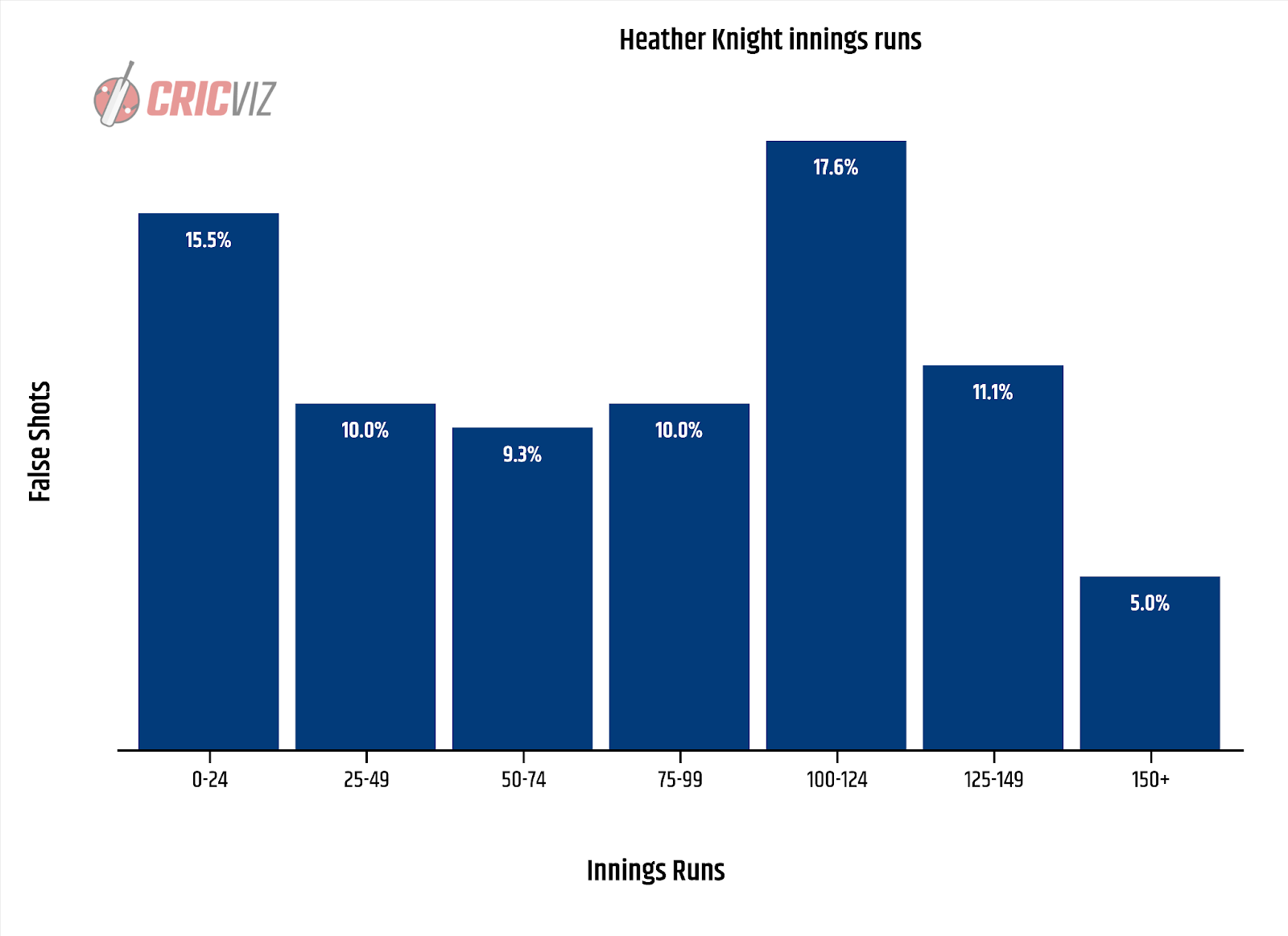 Against pace bowlers, Knight was fairly selective with the deliveries she decided to attack. Against good length balls she attacked just less than a third faced, but when the bowlers drifted from that traditional good 6-8m length, she showed a great deal more intent, attacking closer to two thirds of those deliveries. Overall, 97 of Knight’s 168 runs came against the pace bowlers, with exactly 50 of those coming exclusively from front foot drives.

Knight is widely renowned as an excellent player of spin, and currently averages 75.50 against it across her Test career. She played the spin of King, Gardner and Jonassen exceptionally well, playing just 10% false shots against them – comparatively when facing the pace bowlers, her false shot percentage was higher at just below 14%. 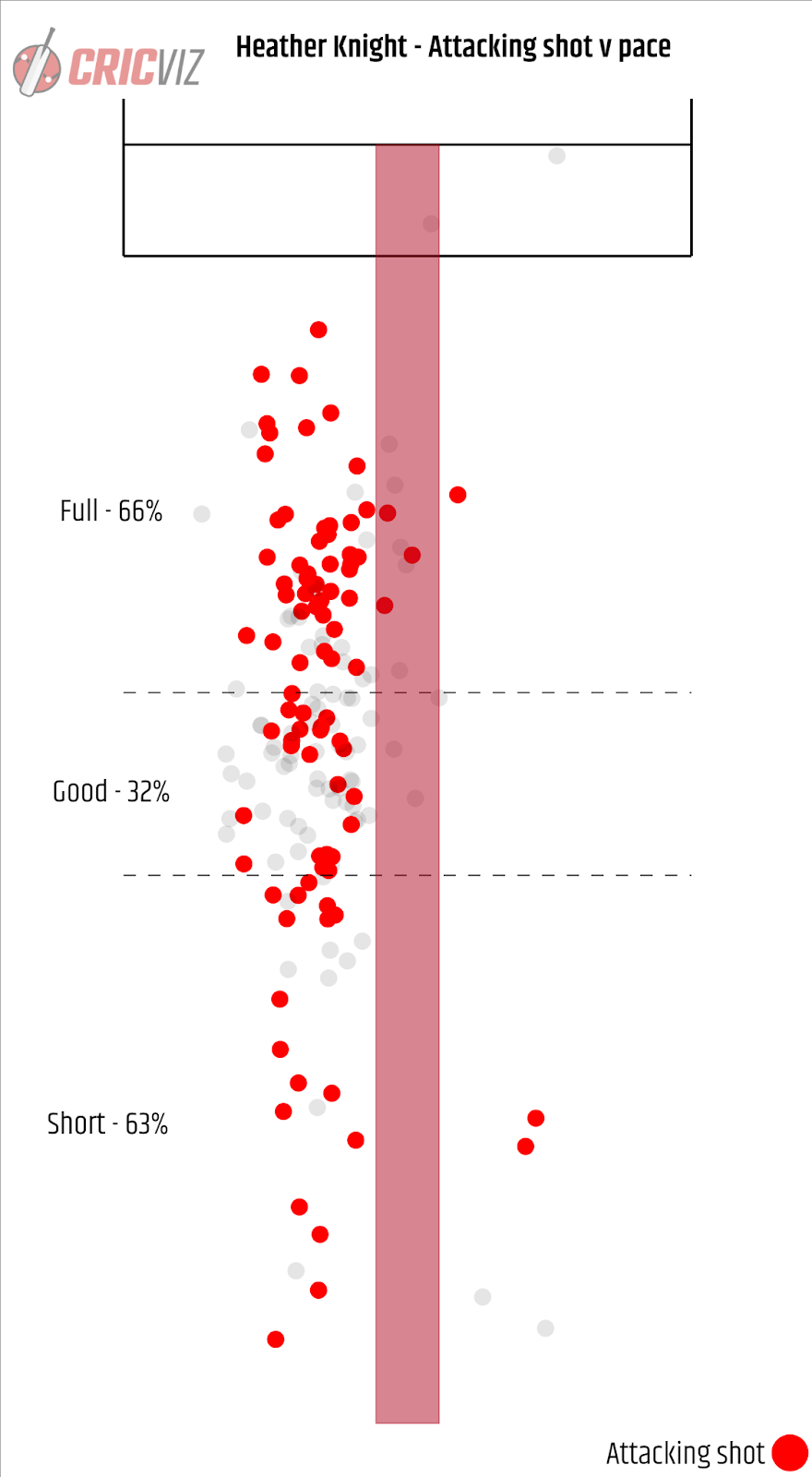 She employed the sweep to great effect against the spinners, scoring 23 of her 71 runs against spin from the sweep or a variant of. The highlight of which was a wonderfully struck slog sweep from Gardner over the mid-wicket fence for six.

All in all, this was arguably one of the most important, high profile innings ever played by an Englishwoman in Test cricket, with the multi-format series already on the line, Knight dragged her team out of the mire to keep them in with the faintest of chances of Ashes glory. It was the highest ever Test score in Australia by a visiting player and Knight becomes the first England captain to make an away Ashes hundred since Charlotte Edwards in 2011, across both the mens and womens game. A truly exceptional effort. Innings like these make the argument for more women’s Test cricket extremely compelling. With the current state of international women’s cricket weighted so heavily towards the white ball formats, it’s a crime that fans are being deprived of seeing their hero’s starved of Test match batting and enjoying the unique situations that arise in Test cricket, as demonstrated by the thrilling finale in this particular match. Innings like this will live long in the memory, and will hopefully provide the spark that the Women’s Test game needs to grow into what we all know it could and should be. 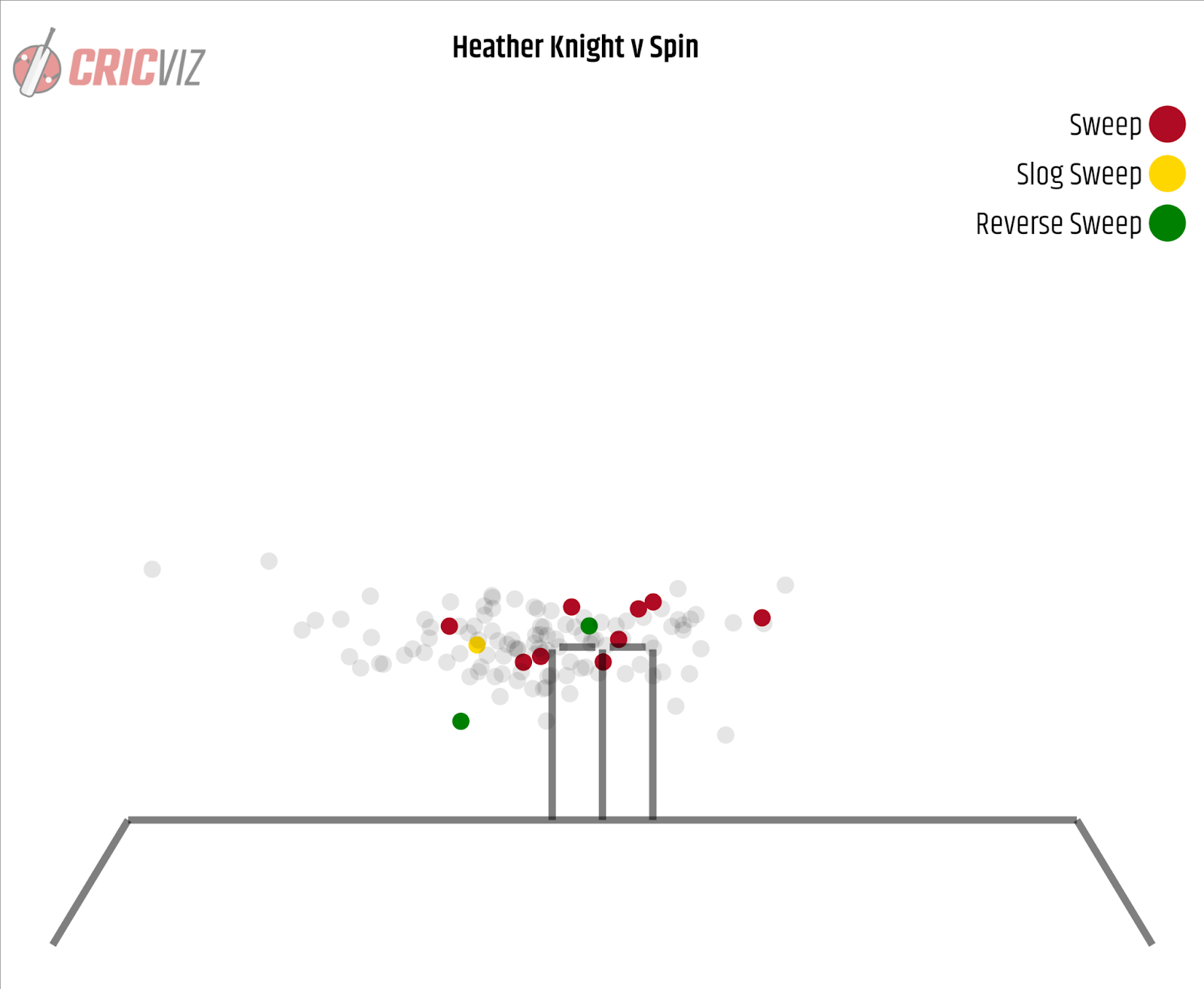